Eczema is a skin complaint that affects about one person in 12 at some point in life. It is often caused by allergies but just as frequently brought on by emotional upsets or by no obvious cause.

The most familiar form of eczema – whose scientific name is atopic dermatitis – is closely related to asthma and hay fever, and it is quite common for people to have one or both of these other complaints too.

Eczema usually makes its first appearance during infancy or early childhood, and tends to fade away as the child gets older. Sometimes, however, it appears in an adult who has not suffered from eczema as a child. 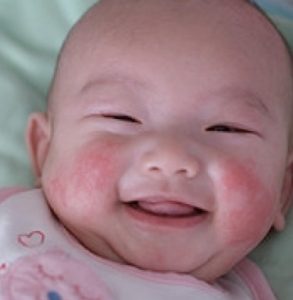 The typical sign of eczema is an inflamed area of skin, which becomes dry and cracked or covered with tiny red pimples or blisters. The most annoying symptom is an itch, and scratching the irritating area aggravates the condition, causing wet, bleeding sores and increasing the risk of infection spreading to other parts of the body. Eczema usually appears first on the face and scalp and then spreads to the hands and limbs, especially in places where the skin folds or is rubbed by clothing. Much of the discomfort is causing by scratching the patches of rash, rather than by the eczema itself.

Eczema in itself is not dangerous or in any way a threat to life. The main problem for the parents of a child with eczema is to discourage him from making the condition worse by scratching the infected skin. Young babies with eczema often rub themselves on their bedclothes in a vain attempt to make the itch go away. Little children can be protected from hurting themselves if they wear cotton mittens (in bed as well as during the day), to prevent them from scratching. Eczema sometimes becomes worse as a result of exposure to certain substances or chemicals. Soap is a common culprit, so is soil. Occasionally even some houseplants such as ivy or chrysanthemums may make a child’s eczema worse, or even exposure to household pets (e.g. cats and dogs).

People who suffer, or who have suffered from eczema are more sensitive than most to irritant chemicals, so it would be wise for them to avoid jobs which involve exposure to such substances. Taking such simple precautions as wearing gloves and a facemask considerably reduces the risks, but young people with eczema should think twice before taking a job where it would be difficult to avoid well-known irritants such as cutting oils, resins and shampoos.