The mixture of blackheads, whiteheads and pink or reddish spots caused by Acne vulgaris occurs mostly on the face, the back of the neck, the upper back and chest, but can sometimes be found in the armpits and on the buttocks, too. 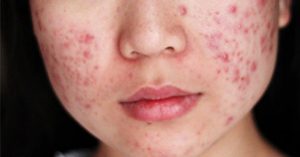 Acne affects young people of both sexes equally, but the lesions are evident at a younger age in girls and occur with earlier sexual maturation. The disease may be more severe in boys.

It starts in adolescence because this is when there are great increases in the production of hormones from the sex organs and from the adrenal glands.

Under their influence, and particularly that of the androgens, or ‘masculinizing’ hormones, the oil-releasing sebaceous glands in the skin, which normally produce just enough oil or sebum to keep the skin healthly supple, become over-active. They release too much sebum, causing a condition called seborrhea.

The female hormones, particularly estrogen, have the reverse effect, which explains – at least in part – why girls are generally less prone to acne than boys.

Eating mostly fresh foods and plenty of fruit and vegetables will ensure a good supply of vitamins, which should help to keep skin healthy.

Blackheads, accompanied by the pink or reddish inflammation, which they cause, are the hallmark of acne. Bacteria that naturally thrive on sebum, particularly two called Staphylococcus albus and Bacillus acnus, are now known to be the cause of the inflammation, not the acne itself.

In response to the multiplying bacteria, the blood vessels expand to bring more infection-fighting cells to the site – this is the inflammatory reaction. As a secondary effect of acne, the bacterial infection may lead to the development of pimples, which are spots filled with pus.

This infection usually only becomes severe, involving the formation of larger boils or abscesses, if the deeper skin tissues become bruised and damaged as a result of squeezing the blackheads to release the sebum plugging the pore. Left undisturbed, each spot or blackhead usually clears up within about a week, but if secondary infection sets in it may take a month or more.

Secondary infection is one of the chief physical dangers of acne, as it can lead to severe permanent scars and crater-like pits or pockmarks. Even more severe is the psychological danger, for acne can turn a happy extrovert into a morose introvert.